This blog's title means "Cuban-hearted woman" (very loosely translated!). I settled on this name because it had a nice ring to my unschooled ear and, more importantly, because I think the Cuban people seem to have so much heart, and they're in my heart for that reason. In general, the people I've met in Cuba are quite consistently open-hearted and big-hearted in the way they relate to each other or to visitors in their beautiful land. A piece of my heart now resides in Cuba, with the warm, wonderful friends I've made there. This blog is not intended to be a guide to Cuba, just a forum for my eclectic bits of writing – poetry, opinion pieces and information gleaned from my personal experience and reading.

Tale #4 - To catch a thief, with great Cuban gusto

And on the fourth day, the posse got their man.

So, me and my posse – at least good chunk of the 45 amigas – went to Niquero to take in the carnival. This once-a-year hoopla draws a crowd, to put it mildly. When we arrived in the late afternoon, the parade was on and the streets were packed. We had to wriggle our way through the crowd, doing the odd limbo under ropes, to achieve sanctuary at the Niquero Hotel, where we were to dine that evening.

I looked around and saw some loonie-sized eyes. Culture shock in mild degrees. The crowd we were politely fighting our way through seemed somewhat surprised to see us slightly pink and white women passing among all the lovely brown people, in all their varying shades. This party was not being put on for the tourists; it was a genuine hometown hoe-down.

We'd been warned that such a crowd draws pickpockets, so I kept close watch on that purse of mine, as did the other amigas, all the way to the hotel. After a tasty and filling dinner, we turned about and headed back down the humanity-clogged street toward the open area where the bands were scheduled to play in a few hours. Some of us were very much looking forward to the live performances, although others were already tired from being in the hot sun.

[ASIDE: As a foretaste of music to come, we had the chance to meet Niquero's homegrown national star, Raul Lora. During dinner, Leticia, our quick-thinking tour guide, recognized him in the lobby, rushed out and invited  him to greet our group in the dining room. Cute as a puppy, he has a great smile and the camera loves him, as do most members of the female persuasion. We learned that his birthday was the following day, so the posse sang "Happy Birthday" to Raul. He grinned broadly but didn't return a tuneful note! Saving his voice for the concert, I guess.] 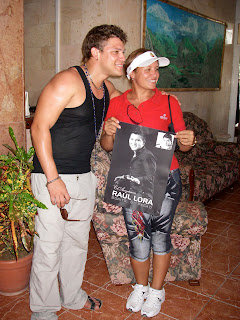 But, let's go back to the street. Following dinner and dessert (eye candy, that is!), we began wending our way through the crowd. One amiga, Karen, walked single file in front of her daughter, so Kaitlin could monitor her mother's backpack, which contained all their valuables. As I found out later, Kaitlin had smacked away the hand of a man who tried to reach into the backpack, and then felt her camera being yanked from its pouch, which was across her shoulder.

Kaitlin yelled "Help!" and dashed after the mugger, mother hot on her heels. However, by the time they charged past me, Karen was flagging. I saw her stop, panting and looking stricken. I followed her eyes and saw her beautiful blond daughter disappearing down a dark alley with about 20 men running along with her.

I did not know what had happened. Perhaps a purse or passport had been stolen. Was someone hurt? All I knew was that I could not let that child out of my sight – she was my amiga, part of my posse. I started running. (For those of you who know me, please pick your chins up off the floor and close your yaps.) Yes, I ran. After about 20 years of walking or skipping briefly, I ran. In my skirt and cheap, glittery thong sandals, I ran.

I caught up with Kaitlin as she was wearying. We held hands and kept running. The pursuing crowd had grown. Three dozen people, maybe more, were charging through the dark, muddy streets with us – or, by this point, mostly ahead of us. When we came to an intersection, some went this way and others went that way, leaping puddles in either direction.

Eventually, the perpetrator was cornered in a cement-block house that was under construction. He leaped through an unfinished window and darted into the bushes. I dug out my small but mighty Petzl headlamp and did my best to illuminate the shrubbery.

Within moments of the robber being trapped in the home's back yard, the police zoomed up in a trio of white Ladas . They had a much better spotlight. We had to leap out of their way as they sprang into action. Karen had caught up with us by then, so the three of us joined hands and stood, somewhat symbolically, beneath the sole street light.

Somewhere amid all this chaos, a woman from the madding crowd accosted me with agitated gestures. She kept saying "Dinero?! Dinero?!" Was I supposed to bribe the officers? It was not clear. Eventually, I ascertained that she was asking if money had been stolen – no, just the camera.

At one point, poor dear Kaitlin commented, "The camera is not worth it!" It was several years old, she said, and not in great shape. But, the crowd was eager to assist and the local constabulary had been having a slow night; once the wheels are rolling, there's no stopping until the mission is accomplished. And so, it was.

The bad guy was shipped off to the police station. We exhaled. Then, through vociferous hand signs, we were directed to get into the back a cop Lada. We complied. What else could we do? So, picture this: three normal-sized women with hips (we nicely filled the backseat) being asked to shove over so a large plain-clothes police officer could add his bulk to the rear payload. I think he must have been holding the door shut because, even with Kaitlin plunked on my and Karen's laps, I can't imagine how the guy closed the car's door. But, we were rolling.

Once at the police station, we quickly discovered that they spoke no English and we spoke no Spanish, to speak of. In my broken bits of sentences, I stated: "Un momento, por favor! El autobús. Translator." I dashed off down the street towards where our tour bus was parked, mentally calling to my friends to bring Leticia. They got the message; she and our bus driver, Jose Alberto, met me very near the bus.

The three of us hurried to the police station. By this time, mother and daughter had already identified the thief in a line-up. Pointing a finger is universal.

Leticia immediately availed herself and was closeted in the bowels of the building, along with Kaitlin and an assortment of officers, for the next two and a half hours. Meanwhile, Karen and I hung out on the front porch of the police station with Jose Alberto, intermittent officers, somebody's wife and a couple of random children. I passed out gum.

Somewhere along the timeline, an officer wandered in, carefully wiping a camera. Someone had found it in a puddle, where the thief had thrown it. Although the lens was shattered, Kaitlin was able to salvage her photo card, which was of most importance to her.

As the evening wore on, I hiked down the street a couple of times to check in the with posse occasionally. By about 11 p.m., they were getting understandably hot and restless. "Jose," I prompted, "el autobús – frio, por favor." Bright and handsome young man that he is, and unusually tall for Cuba, he got it. In short order, he'd moved the bus, parking it in front of the police station, and cranked up the air conditioner. Amigas were soon snoozing cooly.

The police paperwork was winding down. Later, Kaitlin told me, the interview time was protracted because the officer taking her statement typed with a slow form of the traditional international hunt-and-peck strategy. And, the official police printer got jammed as it was trying to burp up the proper sign-here documents.

By about 11:30 that night, we were finally underway back to the resort. It was later than we'd planned to return but nobody complained. En route, I passed my newly acquired cowboy hat among the amigas who were still awake and split the tips evenly between our dear driver and equally dear tour guide. All's well that ends well.

Yes, it ended well for us. The thief will likely do jail time. The thugs, hopefully, have learned not to mess with my posse!

For anyone reading this tale, I hope you will learn the same lesson as the members of my posse. Muggings can happen anywhere, we agreed. But, where in North America would you have dozens of people who don't know you dash off after a criminal? Where would you have so many people immediately mobilized to assist you? Not in Toronto, or even Huntsville!

People in Cuba are willing to help, no questions asked. They will help strangers as readily as locals. They will go out of their way to help. This was demonstrated to me, time and again, during my most resent stay at Club Amigo Marea del Portillo. Do I need any more reason to love this country, these people?
Posted by JennyC at 8:25 PM

Want to support my work? Funds are used only for projects to help Cuban people in need.