This blog's title means "Cuban-hearted woman" (very loosely translated!). I settled on this name because it had a nice ring to my unschooled ear and, more importantly, because I think the Cuban people seem to have so much heart, and they're in my heart for that reason. In general, the people I've met in Cuba are quite consistently open-hearted and big-hearted in the way they relate to each other or to visitors in their beautiful land. A piece of my heart now resides in Cuba, with the warm, wonderful friends I've made there. This blog is not intended to be a guide to Cuba, just a forum for my eclectic bits of writing – poetry, opinion pieces and information gleaned from my personal experience and reading.

After a crazy, later-than-planned night of hanging out at the Niquero police station, a gaggle of posse members were up bright and early to ride again. This time, we were transported past Niquero (waving at our new police amigos as we passed the station) for a hike in a beautiful and culturally interesting national park.

Cuba's Desembarco del Granma was designated as a national park in 1986 and inscribed as a world heritage site in 1999. Within this protected expanse of land – over 26,000 hectares – there is a quaint little fishing village called Cabo Cruz, which has a great lighthouse (photo opp!), a charming beach and a decent seafood restaurant (that is not open on Mondays). Also within the park, there's a historic region known as Las Coloradas, which is important for several reasons.

This was were the Cuban Revolution physically began. The Castro brothers, Che Guevara and 79 of their closest friends came ashore here – "desembarco" means "landing." When in the neighborhood, you should stop at the museum and see the life-sized replica of their legendary yacht, the "Granma." The boat is remarkably small!

When I visited the site on a previous trip, my friends and I hiked out to the actual landing site on the mangrove-snarled coast. (This time, that wasn't possible; I was told that some of the concrete walkway had been damaged during the summer's storms.) It's hard to imagine fighting one's way through that murky, mucky terrain, as those young revolutionaries did. It would have been incredibly exhausting and, since they'd landed in such an obscure location, there would not have been many options for getting a bite to eat.

On this trip, however, the group's goal was to hike into the Las Coloradas site that's immensely rich in archeology and native history. Here's an excerpt from an encyclopedia site that talks about this special place, explaining the cultural heritage:

"The area has a remarkable archaeological value as it was the original settlement of groups that belonged to the Taina Culture. In the area, the local population has strong genetic and spiritual links with this group. The El Guate archeological site includes a group of ceremonial caves. There is a well-preserved XIX Century lighthouse. Finally, most of the relevant milestones related to the Cuban Revolution took place in the area of Cabo Cruz. For instance, in 1956, 82 members of the Granma yacht landed in the area of Las Coloradas."

At the archeological site, stairs give you access to some of the most spiritually significant caves, containing several important idols and a couple of phallic stalagmites. En route to the caves, the terrain is quite rugged, so be sure you've got sturdy footwear...and plenty of water.

Our group was very glad to have two incredibly knowledgeable guides, Nelson and Leicy. They adeptly answered all our questions and provided many interesting details about the site, including the flora and fauna of the area. They both love to share information, and enthusiastically did so – particularly Nelson. In fact, the day of our excursion was supposed to be his day off but, because he truly enjoys talking about history and nature, he volunteered to lead our group!

After the hike, we ate lunch at the Niquero Hotel and, once again, Raul Lora appeared to us. I spotted him in the lobby and, like Leticia had done the day before, accosted him. He graciously agreed to let us sing Happy Birthday to him again (Oct. 17 is Raul Lora's birthday – send him a card next year!), and then hauled out a larger-than-life poster of himself as background for photos. Here's a link to the man in action – Raul Lora with El Abuelo (a different YouTube clip than the one linked in the preceding post, Tale #4). He still owes the posse a song, in my always humble opinion, since we sang to him twice! 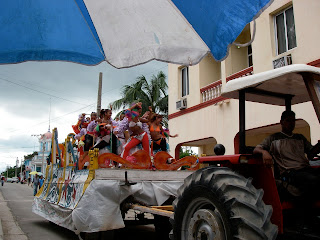 Following lunch, we had a little free time to wander about the streets of downtown Niquero and absorb some of the atmosphere. This was the final day of the town's annual carnival, so there was a parade and a bit of dancing in the streets, not to mention live music and roasted pigs. It was fun to hang out, take pictures and get better acquainted with Leicy – another new friend in Cuba, whom I'll be looking forward to seeing again.

As we headed out of town, we waved, once again, to our cop friends. We were very glad that we didn't have to pay them a visit this time.
Posted by JennyC at 10:37 AM

Want to support my work? Funds are used only for projects to help Cuban people in need.